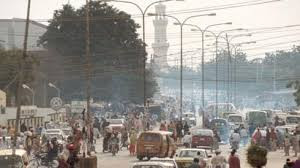 The NSCDC Commandant, Abu Abdu, who confirmed the incident to newsmen, said the security guards are aged 56 and 65.

According to Abu, the suspects confessed that they usually cajole the little girl with N200 whenever they want to sexually assault her.

Abu reiterated the Command’s devotion to reducing the assault on women and child abuse in the State.

He added that the command would continue to keep an eye on motor parks, markets, as well as uncompleted buildings where such illegal activities are being carried out.

The four former Minneapolis police officers charged in George Floyd’s killing appeared before a judge on Monday, June 29.   Tou Thao, J. Alexander Kueng, and Thomas Lane, who are accused of aiding and abetting in Floyd’s death, appeared before Judge Peter Cahill on Monday afternoon in a courtroom at the Hennepin County Jail in downtown […]

Google Meet now allows users to replace their background with an image Google This week, Google announced new features coming to its video conferencing service, Google Meet. Meet has seen an increase in users since COVID-19 has made video conferencing a part of the “new normal.” The service is available for free to all enterprise […]

Father’s Day: 5 Financial Lessons to Pass Onto Your Children

Part of taking care of your children also means teaching them how to cope with the various different stresses which come with adulthood. Fathers, often helm the finances of the family, and the should take it upon themselves to teach their children the responsibility of finances from an early age. “As fathers, we believe it […]

A sudden surge in the number of COVID-19 cases across the US is threatening to derail the nascent economic recovery as many states have either paused or partially reversed their reopenings, officials have warned. “Economic activity in states with the most significant increases in cases in recent days, including Arizona, California, Florida and Texas, appears […]

STEVE WASTERVAL In today’s marketing world, many freelancers and small businesses are constantly trying to find new customers, thinking that this will help them grow their profits. In reality, they are chasing the wrong pathway to growth. Instead of trying to scale how many customers you have, I am all about trying to scale how […]

Getty If you’re a small business owner, it’s likely that the COVID-19 pandemic has left you little time to think about the upcoming tax filing deadline on July 15. Over the last few months, you’ve dealt with temporary lockdowns, lost revenue and layoffs—all while applying for desperately needed assistance.  Many small business owners understandably breathed […]

Apple announced a new set of tools to help educators teach coding to students from grade school to college. This will be mostly about Swift and Xcode that can encourage more students to learn app development. On July 13, Apple will begin offering free online training to educators that will be an introduction to its Develop in Swift […]

How Apple’s WWDC Is A Different Take On Familiarity

Apple Apple This week, Apple did its first all-online Worldwide Developers Conference despite its cancellation due to the COVID-19 crisis. As expected, Apple released a plethora of new news for developers and Apple users that change and improve the Apple ecosystem.   One of the bigger reveals from Apple is its move to implementing its own silicon into […]

How to Add a Horizontal Line Separator in WordPress (5 Methods)